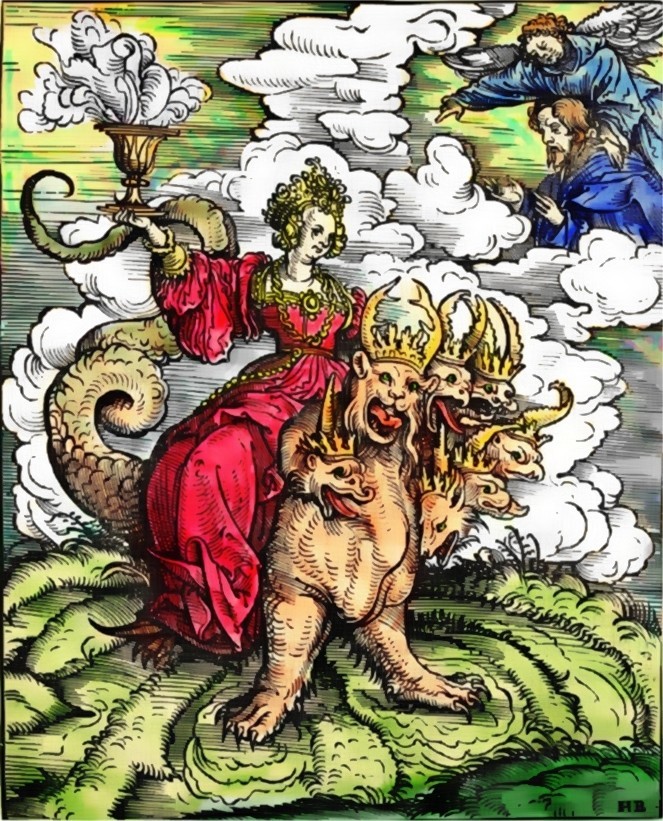 At present, divine history is completing Revelation chapter 16. Isaac Newton noted that the full meaning of prophetic predictions only become apparent at the time of their fulfilment; the Bible is not a horoscope.

We can conclude that a new empire will emerge with one dominant political leader and ten associated countries. This will be a repeat of what happened after the fall of the Western Roman Empire, after AD476. This empire will resemble the Ottoman Empire. It will destroy itself through internal strife. There is a subtle possibility that the new Babylon will also be destroyed in the same way as the old: invasion from the successors to the Meads and Persians. The prophecy against Babylon given in Isaiah 13 would then be fulfilled in full.

The duration of the empire will be a 'little while' according to Revelation 17:10. No indication is given as to what 'a little while' means but prophetic periods in scripture include a generation (40 years) and a lifetime (70 years).

The future of the contemporary state of Israel is a little clearer:

14:1 Behold, the day of Jehovah comes, and your spoil shall be divided in your midst.
2 For I will gather all nations to battle against Jerusalem; and the city shall be taken, and the houses plundered, and the women raped. And half of the city shall go into exile, and the rest of the people shall not be cut off from the city.
3 And Jehovah shall go out and fight against those nations, like the day He fought in the day of battle.
4 And His feet shall stand in that day on the Mount of Olives...

And saying these things, as they watched, He was taken up. And a cloud received Him out of their sight. And while they looked steadfastly toward heaven as he went up, behold, two men stood by them in white apparel; Which also said, Ye men of Galilee, why stand ye gazing up into heaven? this same Jesus, which is taken up from you into heaven, shall so come in like manner as ye have seen him go into heaven.

16: For the Lord Himself shall descend from Heaven with a shout, with the voice of the archangel and with the trumpet of God. And the dead in Christ shall rise first.
17 Then we who are alive and remain shall be caught up together with them in the clouds, to meet the Lord in the air. And so we shall ever be with the Lord.

I saw in the night visions, and behold, One like the Son of man came with the clouds of heaven, and came to the Ancient of Days, and they brought Him near before Him.

1:For, behold, in those days and in that time, when I will bring again the exiles of Judah and Jerusalem, 2 I will also gather all nations and will bring them down into the valley of Jehoshaphat. And I will fight with them there for My people and for My inheritance Israel, whom they have scattered among the nations, and divided My land. 3 And they have cast lots for
My people, and have given a boy for a prostitute, and sold a girl for wine, so that they might drink.
.
(Joel 3:1-3, KJV)

Mat 25:31 When the Son of man shall come in his glory, and all the holy angels with him, then shall he sit upon the throne of his glory:
Mat 25:32 And before him shall be gathered all nations: and he shall separate them one from another, as a shepherd divideth his sheep from the goats:

The sequence of events is as follows:

The present state of Israel will be invaded and the consequences will be quite gruesome (Zechariah 13:7-14:5).

Jesus returns (1 Thessalonians 4:16) and the righteous dead are raised (Vs 17). Jesus and his church enter into judgement of the nations (Daniel 7, 1Thessalonains 4:17, Revelation 1:7, Mathew 25:31-32). The form that the judgement takes is that of causing nations attacking Israel to fight among themselves (Joel 3). The 'Valley of Jehoshaphat' (Joel 3:2) does not exist. The reference is to the gathering of nations against Israel is taken from 2 Chronicles 20 when the traditional enemies of Israel gathered in the valley of the Dead Sea and warred among themselves. The theme of Israel's' enemies destroying each other also occurs in the stories of Gideon and Jehoshaphat.

The next coming of Jesus will not be an unexpected event in the lives of believers. We may not know the day nor the hour but the preceding events will tell us the year and the month.

Subsequent to the judgement of the nations, Jesus' millennial reign commences. There is then a final battle between good and evil. The non-Christian dead are raised and the final judgement of unbelievers commences. These events are a very long way into the future.

What is Not Going to Happen

• There is no imminent return of Christ. There are too many outstanding prophecies which need to be fulfilled. 'The Day of the Lord' which came like a 'thief in the night' was a prophecy about the forthcoming wrath of God against Christ-rejecting Jews in Jerusalem in AD70.
• There is no 'Tribulation' against the church. The tribulation of Matthew 24 was a prophecy about AD70.
• The 'great falling away' described in Paul's second letter to the Thessalonians may be the same mentioned in John's first letter, or to non-Christian Jews in Israel circa AD70.
• The antichrist of John's first letter was probably Nero but there are also other possibilities. Either way, there is no need to consider that this antichrist is part of our future.
• The antichrists described figuratively in Daniel and Revelation have been known within the Protestant churches for centuries. There is no reason to believe that the present 'Pontifex Maximus' or any future Pontifex Maximus poses a great threat to the contemporary or future church.
• 'The mark of the beast' is a figurative expression which describes the identity of certain individuals in the twelfth century. There is no need to believe adherence to the laws of their religion will be imposed on future generations.
• 'The Man of Lawlessness' was John of Giscala who took over the temple of God and abused the high priestly offices in AD70. He will not come back again.