9. When They Met on Olivet 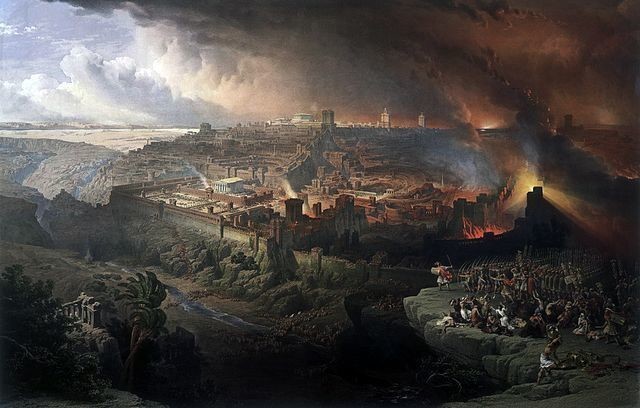 Jesus and some of his followers met on Mount Olivet, near Jerusalem

'And ye shall hear of wars and rumours of wars...and there shall be famines and pestilences'
(Matthew 24:6-7)

Futurists contend that the near future will be characterised by wars, rumours of wars, earthquakes and famines. This is based on certain teachings in Matthew 24. The following response demonstrates that the events to which Jesus is referring are those of the latter half of the first century. The contemporary Jewish belief was that the Messiah would bring with him a reign of peace and prosperity. This recalls the descriptions of Messiah's kingdom in the second half of Isaiah's prophecies. Jesus implies that his kingdom will not appear immediately but that hard times would come first.

The proliferation of 'wars, rumours of was, earthquakes and famines' since the start of the twentieth century is used by Futurists as another sign of the last days (Matthew 24:6-7). But Jesus implies that these should actually come to an end before his final coming. In any case these events began to occur shortly after his time on earth. A famine is recorded in Acts 11. There were severe earthquakes around the Mediterranean during the first century. One earthquake resulted in the deliverance of Peter from prison (Acts 16:26).

Futurists sometimes argue that earthquakes are becoming more common today than ever before. This is hard to substantiate since we may only have maybe a hundred years or so of accurately kept records to compare to millennia of geological time.

The reference to earthquakes is theological and not geological: earthquakes symbolise divine judgement and wrath and therefore any hope of a peaceful life before the next 'Day of the Lord' is in vain.

Family betrayal (Matthew 24:10) and the 'love of many growing cold' accounts for conditions in Jerusalem in AD70, which included family break up and betrayal. The prophecy can therefore be considered to have been fulfilled fully within Jerusalem in AD70.

The Progress of the Gospel

'Jesus said, 'And this gospel of the kingdom shall be preached in all the world for a witness unto all nations; and then the end shall come'.'
(Matthew 24:14)

The gospel has not reached the ends of the world hence one may argue that the preceding prophecies refer to a yet future stage. However, there is another ways of viewing this statement by Jesus. Jesus may be contrasting his gospel of the kingdom to that of the kingdom envisaged by the false prophets.

The false prophets had a false concept of the gospel based on the return of the Messiah during a time of tribulation to end Roman occupation. By contrast, Jesus' gospel was for all people and would bring deliverance from the consequences of sin.

Verses 15 to 24 describe in detail the Fall of Jerusalem. These verses are written in such a way that Jesus anticipated his hearers witnessing the events being foretold.